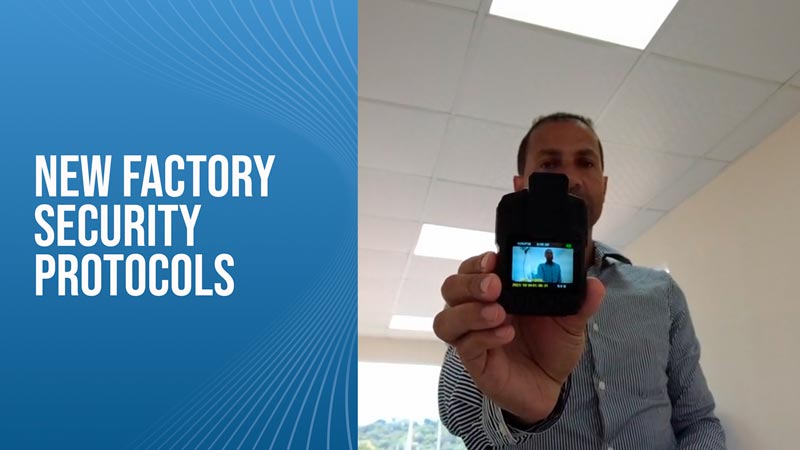 Here at the Ocean Builders factory, we have someone on the premises 24/7 working as a security guard or watchman. Since we have quite a bit of valuable materials like fiberglass and resin as well as plenty of tools that could be a target for theft, we like to keep someone here as a deterrent to any potential thieves.

While most of the employees we have here are wonderful, it can be tempting to catch a nap or kill time on your phone during those boring overnight shifts. In the past, we have found someone who was supposed to be working as a night watchman fast asleep in a hammock early in the morning. Recently, our CEO Grant couldn’t even get the attention of our guard because he had headphones in and was watching videos on his cell phone.

We are paying our guards to be aware and keep an eye on the factory, not relax and watch videos while not paying attention. To help combat this, we recently received some new devices that will keep the guards accountable during their shifts.

The first device we received is a wearable body camera that the guards will wear on their chest while they are working. This camera will record whatever they are seeing, so if they are bent over and taking a nap on the desk, the camera will show that. Also if they are just playing on their phone the whole shift, then the camera will show that as well. These cameras can record video and take still images so we will do some testing and configure them to best fit our needs.

The second thing that we got is a small electronic wand that is paired with 10 small tags. These tags will be placed in different locations around the factory and the point of this system is to ensure that the guards are actively moving around to the different parts of the factory. The guard will have to take the wand and scan each tag every so often to prove that they weren’t just sitting in the office.

Keeping an active presence at the factory is important when trying to deter theft so these devices will help to make sure that the entire perimeter of the factory is being monitored and that the guards aren’t just sitting down and wasting time on their phones the entire shift. We are always trying to make things better here and implementing these new devices will help to increase the security here at the Ocean Builders factory.