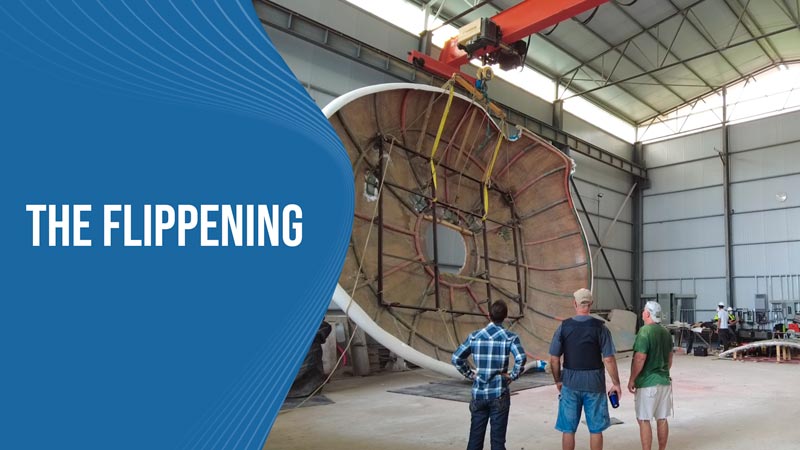 It’s time to flip the first SeaPod roof over to its normal position, an event that we are dubbing The Flippening. This task is challenging for several reasons and it took some teamwork to get it done, but in the end, we had a successful flip and learned some things to hopefully make the next one easier.

This SeaPod roof is made of fiberglass and has a skeleton that is actually made of pool noodles that were covered in epoxy and fiberglass giving them incredible strength and rigidity. That being said, the roof is a very big piece of lightweight material so the risk of damaging something is real.

We work with these roofs while they are upside down because it makes the job much easier. It is much easier to work with it like a bowl where we aren’t having to do everything over our heads, the only caveat is that we have to flip it over when we are finished and that is easier said than done.

We use our crane to lift the roof from the metal frame in the center. The first problem that we run into is that the roof is about as wide as our crane is high, so the crane can’t actually lift the roof high enough to get it off the ground. We had to bring in a chain hoist as a backup to give us a little bit of extra lift.

The second problem is that the crane has quite a bit of lifting strength but very little side-to-side pulling strength so the crane was having trouble pulling the roof hard enough to tip it over. Using the chain hoist allowed us to get it high enough and eventually it tipped over so that we could slowly and safely lower it down to the ground.

This roof section was a cumulation of about a year and a half of physical work between making the plug, making the molds, and then making the product. This was our first attempt at it so there was a lot riding on this flip, both physically and emotionally, but luckily we found success.

This is something that we will have to do with every roof that we make so as we keep practicing this process, it should become more smooth and easier to flip. The first Flippening was a success, be sure to stay tuned to see how the next one goes!