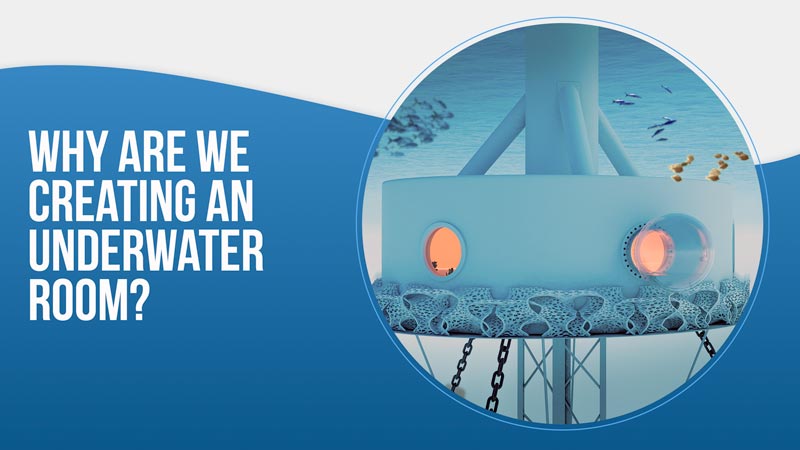 Underwater habitats, also known as underwater stations, submarines, or in our case, the underwater room, provide a unique and valuable opportunity for scientists and researchers to study marine life and the ocean environment from a controlled setting. These habitats allow for extended stays underwater and enable more in-depth and prolonged research than would be possible with traditional diving methods.

In addition to scientific research, underwater habitats can also potentially be used for tourism and as a means of studying the potential for long-term human habitation in underwater environments.

The first underwater habitat was the SEALAB program which was initiated by the United States Navy in the 1960s. This program consisted of several underwater stations that were deployed to depths of up to 610 meters (2,000 feet) and were used to study the effects of prolonged underwater habitation on human physiology and physiology.

Since then, several other underwater habitats have been developed and used for scientific research. These include Jules’ Undersea Lodge in Key Largo, Florida, which is used for research and tourism, and the Aquarius Reef Base, located off the coast of Florida, which is operated by the National Oceanic and Atmospheric Administration (NOAA) and is used primarily for scientific research.

Underwater habitats provide scientists with a unique opportunity to study marine life and the ocean environment in a controlled setting. This allows for more in-depth and prolonged research than is possible with traditional diving methods.

For example, researchers can study the behavior of marine animals over an extended period, rather than just observing them for short periods during dives. Human divers also have limits that can be surpassed by underwater structures. For example, the limit for recreational diving is 40 meters (130 feet) and while pros can go deeper, there are limits to how long they can stay that deep and plenty of dangers to consider.

Though the world record for the deepest dive is 332 meters(1,090 feet), it took nearly 15 hours to safely return to the surface. Something that is obviously not feasible for scientists trying to work underwater. An underwater habitat could allow scientists to observe the ocean that is surrounding them without the risks and dangers of subjecting the human body to so much pressure.

In addition, habitats can be used to study the effects of long-term exposure to different water conditions, such as temperature and pressure, on marine life and humans.

Underwater habitats also have the potential for use in tourism. These habitats provide a unique and exciting opportunity for tourists to experience the ocean in a way that is not possible through traditional diving methods.

Tourists could have the chance to stay overnight in an underwater habitat and observe marine life in its natural environment. Waking up underwater and taking a look out of your window to see the open ocean and all of the marine life surrounding you will be an unbeatable experience.

Underwater habitats can also be used to study the potential for human habitation in underwater environments. This is especially relevant as the world’s population continues to grow and resources become scarce. The study of underwater habitation could lead to the development of new technologies that could be used to create underwater cities and settlements in the future. We are already seeing cities running out of ground space and having to build up, there is a possibility that we will eventually start building down in the ocean.

Is Underwater Habitation The Future?

Underwater habitats provide a valuable opportunity for scientific research, tourism, and the study of human habitation in underwater environments. These habitats allow for extended stays underwater, enabling more in-depth and prolonged research than is possible with traditional diving methods.

Underwater hotel rooms could be the next big thing in the tourism industry and the data that we get over the next few years of studying how humans react to life beneath the sea could be incredibly valuable in the future if the world turns to the oceans for a place to live.

There is lots to learn and discover and we are very excited about getting the ball rolling on this research with our underwater room! The future is now and life underwater is right around the corner!