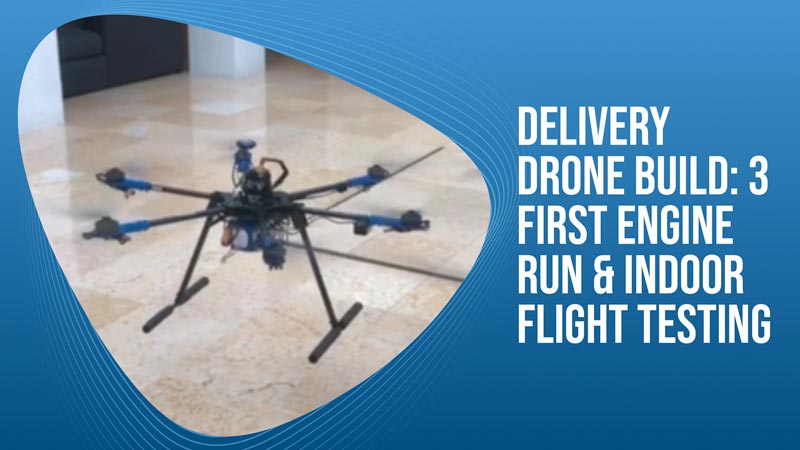 Here we have a quick video showing the first time that we fired up the motors on the drone and also the first indoor hover test for our custom-built delivery drone. After we got everything assembled and wired up, the next step is to turn it on and make sure that everything works and so far, so good.

You can see in the video below when Omer turns on the motors and all of the propellers start turning. This is kind of like starting your car and having it idle. The motors are turning, but not generating enough lift to fly. When he pushes the throttle up, the motors turn faster and the propellers start to generate lift, just like pushing the accelerator in your car to make it move forward. He then powers off the unit and you can see that everything stops together, which means that it is communicating well.

He also did a short indoor hover test to make sure that the drone could take off, hover stabally, and land safely. There are fewer variables like wind or people indoors so it is safer to do the first try inside. You can see that the drone powered up and took off with no problems. A stable hover means that all six motors are turning at the same speed and producing similar amounts of lift. If things were out of calibration, then the flight wouldn’t be stable because the other motors would be trying to compensate, so again, this is a great sign.

This project is really starting to take flight and we will keep the updates coming as we start to integrate the software and the package pickup/dropoff system.