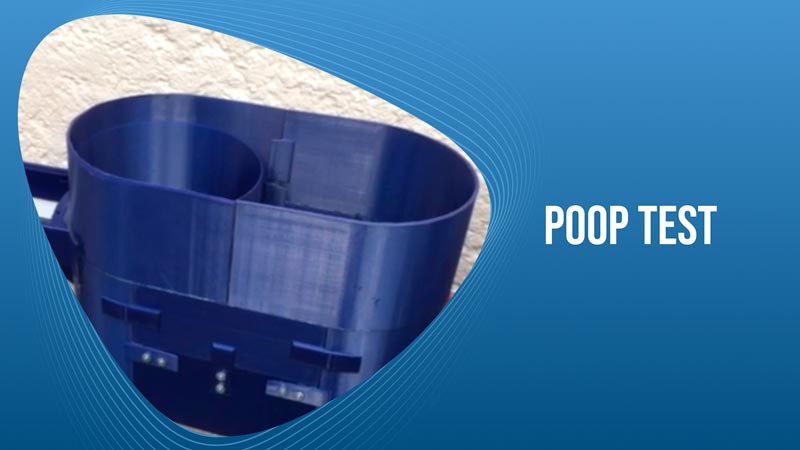 Omer is back to give us a live demonstration of how the poop separator, the incinerator, and the heat exchanger will work together to safely burn all of the solid waste from the toilet and capture the heat that is generated during the process. This will allow the SeaPod to safely and responsibly dispose of the solid waste while allowing you to have a normal toilet experience like we have on land.

For the purpose of this demonstration, Omer has some dog poop that we will dispose of in the same way as if it were from a human. We start with a look at the poop separator which will catch the solid waste and allow the liquid waste to pass through and go to treatment. The solid waste sits on the poop scale which monitors the amount of poop present and starts the process at the best time for the most efficient burn.

Once the scale sees enough weight, it sends a message to the controller to start the actuation of the piston. The piston pushes the poop down the funnel and into the incineration chamber where it will be burned. When the piston returns to the original position, it sends a signal to light the jet burners.

The burners are designed to burn at the optimal temperature and intensity so that the burn will be efficient and use the least amount of energy possible. Since the burners are generating so much heat through the incineration process, we wanted to find a way to capture and use it instead of letting it go to waste.

The idea that we came up with to utilize this heat was to capture it and use it to make hot water. So the heat exchanger captures the heat and then transfers that heat through itself and into the water which is passing through it. After the water is heated, it is stored in insulated hot water tanks which will hold it until it is needed for the sinks or shower.

This entire process will happen automatically and the user experience of the toilet won’t be any different than using a toilet on land. Since efficiency is always important when living off the grid, we wanted to make sure that this process would be efficient and also allow us to utilize and repurpose the heat that we have to make to dispose of the poop. This idea is something that the world has never seen so we are proud to bring this first-of-its-kind toilet to you and we hope it will one day be used on vessels all around the world.