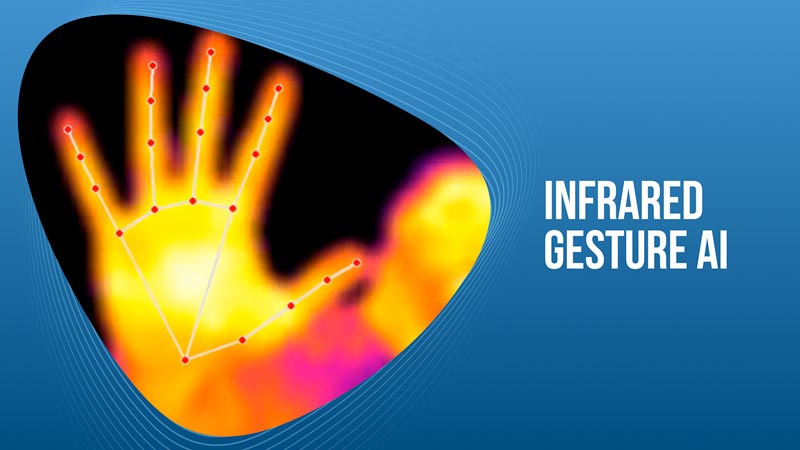 We are back with Omer for an updated look at the progress that he has been making on our Gesture AI technology. Gesture AI allows you to control different things in your home by simply waving your hand or making certain gestures that the system will recognize.

This sounds crazy, but the video below will help you visualize how it works. Basically, each command is linked to a specific hand gesture so when the system sees that gesture, the Brain Computer makes the command. It sounds complicated, but it is incredibly easy to use and we think it will make your life much easier and more convenient.

So, in the video below you can see how Omer is simply holding his hand up to control the system. The first gesture that he makes is a rock and roll gesture like this 🤟 and when the thermal camera identifies the gesture, it starts to play the music. To skip to the next song, he holds up the peace sign ✌️and the camera recognizes the gesture and skips to the next song. When he wants to go back to the previous song, he simply holds up a finger gun like this 👆and you can see that the system goes back to the previous song.

And of course, gesture AI is able to be used for much more than music with our multiroom audio system, things like the LED lighting in the home can be controlled by Gesture AI as well. Omer has set his system up to control some other things as well. By holding up a high-five ✋he turns on the red lights on his desk. He then repeats the same sign to turn off the lights. The main lights in his house are set up to work with the cool sign 🤙 so he can turn his lights on and off by simply throwing up a quick hang loose.

You can also see that the camera works just the same in the dark. That’s because it is using thermal imaging instead of traditional light imaging like a normal camera. The thermal camera sees heat instead of light so even in total darkness, it can identify your hand and the gesture that you are making. These first five gestures will be included and as we continue to develop the technology, we will add more gestures so for now, there will be five separate commands. The user will be able to select which gesture controls which command so you can customize which parts of the home are controlled by these gestures.

We are really excited about this technology and we can’t wait for everyone to experience it. We know it’ll change your life and you’ll never want to reach for a light switch or a remote again!!!

Development work on future emergency wristwatch for the Lifeguard Drone